January 24, 2019
My Great Grandfather Michael O'Connor for a period of time had a Billiard Hall at Cobar and the following are mentions of this from newspapers that I found on Trove.

The 1903-04 Australian Electoral Roll has him listed as:

He is also listed in the 1904 Sands Directories: Sydney and New South Wales, Australia as such:

The 1913 Australian Electoral Roll has him listed as a labourer however.

Billiards.
Mr. M. O'Connor, of the Grand Hotel Billiard Saloon, has another tournament in full swing.  Entries closed on Saturday, and about 60 players have nominated.

A BILLIARD tournament is about to be started at M. O'Connor's rooms.  Nominations close at noon to-day.  Entries free. See advt. 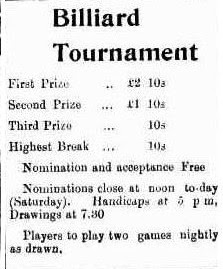 TO LEASE AT LOW RENTAL.- The Court House Hotel Billiard Room, which has just been thoroughly renovated by Mr. Mick O'Connor, lit by electricity, and is therefore one of the best tables in Cobar.  Apply - H. Balchin.