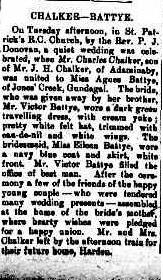 On Tuesday afternoon, in St. Patrick's R.C. Church, by the Rev. P.J. Donovan, a quiet wedding was celebrated, when Mr. Charles Chalker, son of Mr. J. H. Chalker, of Adaminaby, was united to Miss Agnes Battye, of Jones' Creek Gundagai.  The bride, who was given away by her brother, Mr. Victor Battye, wore a dark green travelling dress, with cream yoke ; pretty white felt hat, trimmed with eau-de-nil and white wings.  The bridesmaid, Miss Eileen Battye, wore a navy blue coat and skirt, white front.  Mr. Victor Battye filled the office of best man.  After the ceremony a few of the friends of the happy young couple - who were tendered many wedding presents - assembled at the home of the bride's mother, where hearty wishes were pledged for a happy union.  Mr. and Mrs. Chalker left by the afternoon train for their future home, Harden.