July 02, 2017
Today's post involves my 2nd grand uncle Albert 'Victor' Battye.  He was the son of Edward Joseph Battye and his wife Ellen Mary nee Pierse, born in Gundagai in 1888.  He died in 1919 at Gundagai. 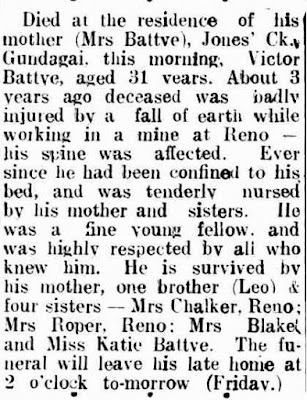 Died at the residence of his mother (Mrs Battye) Jones' Ck., Gundagai. this morning.  Victor Battye, aged 31 years. About 3 years ago deceased was badly injured by a fall of earth while working in a mine at Reno - his spine was affected.  Ever since he had been confined to his bed, and was tenderly nursed by his mother and sisters.  He was a fine young fellow and was highly respected by all who knew him.  He is survived by his mother, one brother (Leo) & four sisters - Mrs Chalker, Reno; Mrs Roper, Reno; Mrs Blake and Miss Katie Battye.  The funeral will leave his late home at 2 o'clock to-morrow (Friday.)

Transcript:
OBITUARY.
Mr. Victor Battye.
The death occurred at an early hour on Thursday morning, at the home of his mother, Jones' Creek, of Mr. Victor Battye, aged 31 years.  Deceased was the victim of a mining accident at the Gundagai North Gold Mine in October, 1916 and for three years he had been an invalid, cared for with the greatest tenderness by his devoted mother and sisters.  The accident was caused through a fall of stone which pinned him across the back, and although released with the greatest speed by his mates, the grave injuries he had received left him paralysed  for the remainder of his life.  After been treated in the Gundagai Hospital he was taken to Sydney and the best medical opinion was obtained, but no hope was held out for his recovery.  Vic., who bore his suffering to the last with the greatest fortitude, was a young man of quiet and unassuming habits and was held in the greatest esteem by all who knew him.  He gained his first experience as a miner as battery boy at the Prince of Wales, and was afterwards employed at the Long Tunnel.  Few more capable or experienced prospectors could found in the district, and it was he (with his brother-in-law, Mr. Roper) who developed the Gundagai North mine into a payable proposition after it had been abandoned by two other parties, and in which property he held the highest opinion right up to the time of his death.  Besides being an experienced miner and prospector deceased possessed a good knowledge of mining machinery and its workings.  The early demise of such men as he is a decided loss to one of our greatest industries, while the grief within the home in which he was for a great many years the head, will know no bounds.  His elder brother, Ernest, was killed in a mining accident at Cobar some years ago.  Still living in Gundagai are his mother (Mrs..E.J. Battye) and four sisters (Mrs Chalker, Mrs C. Roper, Mrs S. Blake and Miss Kattie Battye), and one brother (Leo.), who is at present a patient in the Wagga Hospital.  The funeral will leave his late residence at 2 o'clock to-day (Friday) for the North Gundagai cemetery.

The death is reported from Gundagai of a native of the town.  Mr. Victor Battye, aged 31.  He had suffered for three years from injuries sustained by a fall of earth.