August 14, 2013
My 4th Great Grandmother Flora Sinclair (nee McRae) along with her son David Sinclair are mentioned in today's Trove Tuesday article. Flora arrived in Australia from Scotland in 1837 on board the ship Earl Durham with her husband William Sinclair and their children Peter and Margaret.  Unfortunately William died c.1852 leaving Flora a widow with a large family to support.  One interesting new fact I learned from this article was that Flora needed a translator as she didn't speak English. She had been in Australia for nineteen years and still didn't speak the language, yet the family grew and prospered under her guidance.  Flora never remarried, she died on the 10th June 1885 and is buried at North Gundagai General Cemetery with her son Peter Sinclair who died in January 1875. 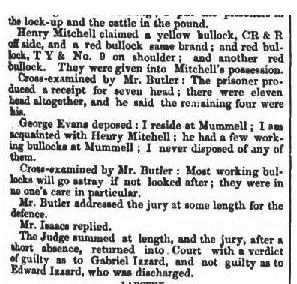 
William Sinclair and his wife Flora McRae had the following children:


It would seem that the Izzard brothers had quite a reputation for illegally possessing other peoples livestock!

Gabriel and Edward Izzard have been apprehended by the Chief Constable of Goulburn, on three distinct charges of cattle stealing; as these men are notorious for the offence, the attention of the Police is directed to this matter, as there may be other charges of a like nature against them.'