August 08, 2013
My Great Grandmother Bridget Anastasia Donnelly (nee Lambert) was the inspiration for a number of Henry Lawson's works including the one below. 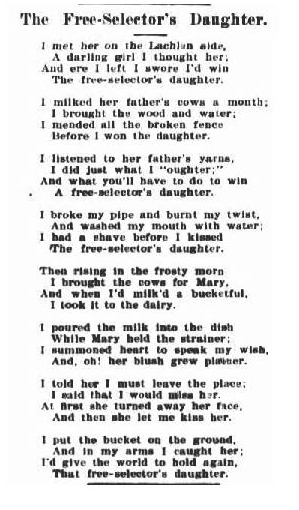 
'When he went back in 1891 to stay for a few weeks with old Harry O'Brien, who had been a mate of his father, and who was the tennant of the Lawson home, he met and became engaged to a niece of O'Brien- Bridget Lambert, who inspired 'The Drover's Sweetheart', 'The Free Selector's Daughter', and his sweetest poem, 'The Sliprails and the Spur'.

'Among the Mutch papers was a series of letters from Bridget Lambert, to whom Lawson became engaged in 1891.  She wrote about Lawson’s courtship, and of his visits to the schools at which she was teaching.'