This post continues on with my sideline project on burials at Wagragobilly Cemetery.

Died 7th May 1935 (see headstone photograph here)
Sadly Aubrey is one of the children buried at Wagragobilly cemetery.  He was only nine years old when he died and had been in failing health for some time prior to his death apparently.  Born in 1925 he was the son of Aubrey James Naughton and his wife Annie née Boon. 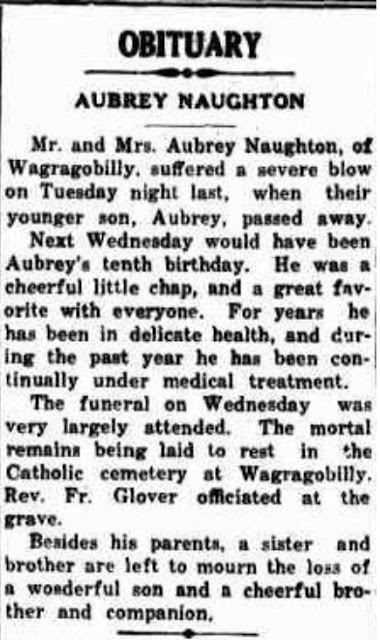 Source: OBITUARY (1935, May 9). The Gundagai Independent (NSW : 1928 - 1939), p. 5. Retrieved from http://nla.gov.au/nla.news-article225000255
Transcript:
OBITUARY
AUBREY NAUGHTON
Mr. and Mrs. Aubrey Naughton, of Wagragobilly, suffered a severe blow on Tuesday night last, when their younger son, Aubrey, passed away.Next Wednesday would have been Aubrey’s tenth birthday.   He was a cheerful little chap, and a great favourite with everyone.   For years he has been in delicate health, and during the past year he has been continually under medical treatment.The funeral on Wednesday was very largely attended.  The mortal remains being laid to rest in the Catholic cemetery at Wagragobilly. Rev. Fr. Glover officiated at the grave.Besides his parents, a sister and a brother are left to mourn the loss of a wonderful son and a cheerful brother and companion.

Source:ABOUT PEOPLE (1935, April 29). The Gundagai Independent (NSW : 1928 - 1939), p. 2. Retrieved from http://nla.gov.au/nla.news-article225000098
Transcript:
Aubrey Naughton, youngest son of Mr. and Mrs. A. Naughton, of Wagragobilly, has not been well of late, and is causing his relatives and friends much anxiety.
Claire/Clara Ann Naughton
Died 17th August 1951 (see headstone photograph here)
Clara was also the daughter of Aubrey J Naughton and his wife Annie née Boon.  She tragically collapsed and died suddenly while playing tennis aged fourteen. 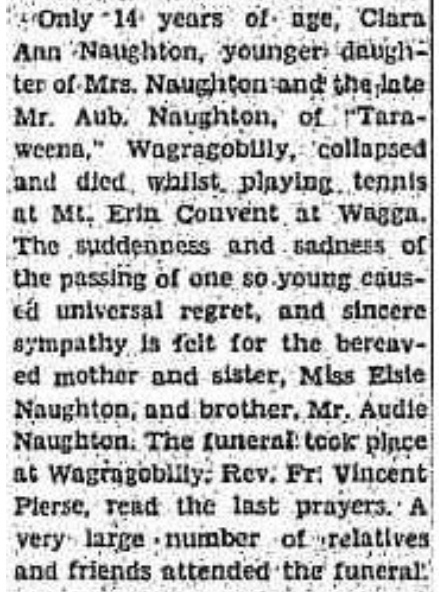 Transcript:
Only 14 years of age, Clara Ann Naughton, younger daughter of Mrs Naughton and the late Mr. Aub. Naughton, of ‘Taraweena,’ Wagragobilly, collapsed and died whilst playing tennis at Mt. Erin Convent at Wagga.  The suddenness and sadness of the passing of one so young caused universal regret, and sincere sympathy is felt for the bereaved mother and sister, Miss Elsie Naughton, and brother, Mr. Audie Naughton.  The funeral took place at Wagragobilly. Rev. Fr. Vincent Pierse, read the last prayers.  A very large number of relatives and friends attended the funeral.

Died 31st July 1952 (see headstone photograph here)
Elsie was another child of Aubrey J. Naughton and his wife Annie née Boon.  She was in her early thirties when she passed away, not longer after becoming engaged.  Elsie shares a grave and headstone with her sister.  I found quite a few newspaper articles mentioning Elsie and have added some of the more interesting ones below. 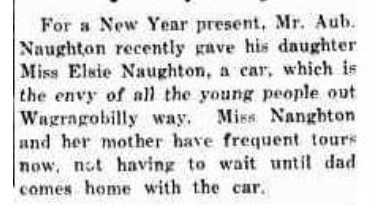 Source:Trove. MY. LADY’S. CORNER (1938, March 3). The Gundagai Independent (NSW : 1928 - 1939), p. 3. Retrieved from http://nla.gov.au/nla.news-article226649884
Transcript:
For a New Year present, Mr. Aub. Naughton recently gave his daughter Miss Elsie Naughton, a car, which is the envy of all the young people out Wagragobilly way.  Miss Naughton and her mother have frequent tours now, not having to wait until dad comes home with the car.

Source: Trove. CHIEFLY PERSONAL (1941, June 3). The Tumut and Adelong Times (NSW : 1864 - 1867; 1899 - 1950), p. 2. Retrieved from http://nla.gov.au/nla.news-article138984702
Transcript:
Miss Thorean Foley has been chosen to represent Gundagai as their queen in the big district patriotic effort. Miss Elsie Naughton is the Brungle-Tarrabandra-Darbalara-Wagga queen.  Girls, to represent other sections of the district have yet to be chosen.

Source: Trove. 21st BIRTHDAY (1941, July 22). The Tumut and Adelong Times (NSW : 1864 - 1867; 1899 - 1950), p. 1. Retrieved from http://nla.gov.au/nla.news-article138997459
Transcript:
21st BIRTHDAY
Congratulations and good wishes were showered on Darbalara’s queen, Miss Elsie Naughton, on Tuesday evening last, the occasion being her 21st birthday. Prior to the Woolshed Ball Mr. and Mrs. Naughton entertained a number of their daughter’s friends at a dinner party.  Amongst the young folk who gathered at the homestead to offer felicitations were Cath. and Lance Holm, the Hogan twins, Joan and Mary, the Sheahan brothers, Bert, Barry and Jerry and their sister Linda, Cecilia and Darcy Carberry and Edna Carberry.  During dinner Lance Holm proposed the toast of the guest of the evening and made a presentation of the parents gift - a substantial cheque.  The other boys in the party paid glowing tributes to Elsie and offered their sincerest wishes for her happiness.  Jerry Sheahan, who acted as chairman, proposed the toast of the host and hostess, the squire of ‘Tarraweena’ and his wife, who wore a gown of blue floral georgette with a matching coat.  Later in the evening Elsie, looking radiantly happy in a frock of pink sheer, accompanied her guests to the Woolshed Ball, where they all joined in the night’s fun and gaiety.

Source: Trove. Social News of the Week (1942, September 24). Catholic Weekly (Sydney, NSW : 1942 - 1954), p. 18. Retrieved from http://nla.gov.au/nla.news-article146499311
Transcript:
Her many friends from city and country will be pleased to know that Miss Elsie Naughton, of Wagragobilly, has returned home from a health trip to Sydney.

Source: Trove. BEXLEY R.S.L. (1952, August 8). The St George Call (Kogarah, NSW : 1904 - 1957), p. 1. Retrieved from http://nla.gov.au/nla.news-article235296357
Transcript:
Sub-branch members were shocked to hear of the untimely passing of Miss Elsie Naughton, of Gundagai, last week.  The late Miss Naughton, who had recently become engaged to Mr. Dick Connors, was a very popular figure during her sojourn in Bexley and we extend sincere sympathy to her mother and family, to Mr. Connors and to Mr. and Mrs. Don Taylor, with whom she was holidaying.

Died 24th May 1934 (see headstone photograph here)
Mervyn is so far the youngest child buried at Wagragobilly Cemetery that I have mentioned.  He was born on the 2nd December 1930 the son of Thomas Mervyn John Crane and his wife Eliza Rachel née Britt.  Unfortunately I was unsuccessful in finding any newspaper articles referencing his death. 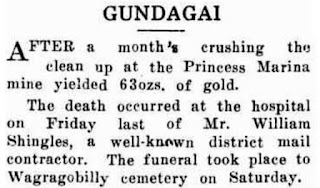 Source:GUNDAGAI (1936, August 14). The Albury Banner and Wodonga Express (NSW : 1871 - 1938), p. 8. Retrieved from http://nla.gov.au/nla.news-article112693648
Transcript:
GUNDAGAI
AFTER a month’s crushing the clean up at the Princess Marina mine yielded 63ozs. of gold. The death occurred at the hospital on Friday last of Mr. William Shingles, a well-known district mail contractor. The funeral took place to Wagragobilly cemetery on Saturday.

2nd of February 1890 (see headstone photograph here)
I couldn’t find a Trove article about Johanna’s death but I did find her husband Joseph’s death notices which mention that his first wife was a Keefe and that she died thirty four years prior to him.

Source: Trove
Death of Mr Joseph Webb (1924, September 9). The Tumut Advocate and Farmers and Settlers' Adviser (NSW : 1903 - 1925), p. 5. Retrieved from http://nla.gov.au/nla.news-article112275169
Transcript:
Death of Mr Joseph Webb
There passed away at his residence, Lambit-street, Tumut, on Saturday last, Mr. Joseph Webb, a pioneer and resident of Wagragobilly for 40 years or over, at the age of 80 years.   Bowed down by the weight of years, Mr Webb, last year, gave up farming pursuits and came to Tumut to live, having acquired a property below the hospital, from Mr. Hayden.  There he remained until his death.  He was twice married, his first wife predeceasing him by 34 years.  By that union there were seven of a family, five sons and two daughters, all of whom survive. The sons are Joseph, Herbert, William, James and Fred, and the daughters Ada (Mr. M. O’Keefe, Wagra)and Lora (Mrs. J. Collins, Wagra).  The second and surviving wife was Miss Dunn, sister of Mrs. Thos. O’Keefe, of Russell-st., Tumut, one son, Clarence, being the issue.  The funeral took place yesterday afternoon, the remains being interred in the Roman Catholic portion of the cemetery, Rev. Fr. Kinane performing the burial rites at the grave, and Mr. H. W. Baker faithfully carrying out the funeral arrangements.  The pall-bearers were Messrs. Fred., Bill and C. Webb (sons), M. O’Keefe (son-in-law) and P. and L. Keefe (grandsons).

Source: OBITUARY. (1924, September 8). The Gundagai Independent and Pastoral, Agricultural and Mining Advocate (NSW : 1898 - 1928), p. 2. Retrieved from http://nla.gov.au/nla.news-article130348107
Transcript:
OBITUARY.
MR. JOSEPH WEBB
Death has claimed another old district resident in the person of Mr. Joseph Webb, who for over 60 years lived in these parts. Born in Sydney 81 years ago, deceased spent his boyhood days at Campbelltown, and when budding into manhood, came to Gundagai district.  For some years he worked on Gobarralong and Tarrabandra stations, and eventually he selected on Oak Creek, Darbalara.  Later he sold out there, and bought a block of land at Wagragobilly, where he lived for nearly 50 years.  Old age coming on, he sold his holding a couple of years ago, and went to live in Tumut, where he died on Saturday last.  A joyous soul was Joe Webb, full of fun frolic to the last - a man who loved to sing a good song and dance a jig.   He was twice married, his first wife predeceased him a good many years ago.   His second wife, Miss Dunn survives.  Children by the first marriage are:- Sons: Messrs Joseph, Herbert, William, & Frederick. Daughters: Mesdames Michael Keefe and Jno. Collins.  Mr Clarence Webb was the only issue of the second marriage.  About 20 grandchildren are left.