May 12, 2020
I found this article in the Trove Digital Newspaper collection and can't help but wonder if the Joseph Jones involved is my 3rd Great Grandfather Joseph Dolphin Jones (see more here).  My Joseph Jones died as a result of injuries received in a buggy accident on the 22nd May 1885 at Sutton Forest.  If this article below also involves him then it is possible that the after effects of this accident may have contributed to the events that caused his death.  In that injury/weakness caused by the February accident to his arm/shoulder may have led to him releasing the reins when the horse shied in May, which subsequently led to the horse bolting and the buggy overturning causing the injuries that ultimately caused his death. 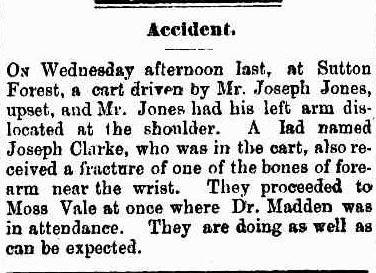 Transcript:
Accident.
ON Wednesday afternoon last, at Sutton Forest, a cart driven by Mr. Joseph Jones, upset, and Mr. Jones had his left arm dislocated at the shoulder.  A lad named Joseph Clarke, who was in the cart, also received a fracture of one of the bones of forearm near the wrist.  They proceeded to Moss vale at once where Dr. Madden was in attendance.  They are doing as well as can be expected.