March 03, 2019
Today's post involves my 2nd Great Aunt Bridget Greene nee Stevens husband William James Greene.  He was the son of John and his wife Pamaly Greene nee Curll and was born in Gundagai, New South Wales in 1870.  In 1897 he married Bridget Stevens and together they had seven known children.  Bridget apparently died somewhere around 1915 (see more here).  William then ended up in Queensland where he married for the second time to a Mary Florence Levy in 1916.  William and Mary had two known children.  William is recorded as being buried at the Wagga Wagga Monumental Cemetery, location Roman Catholic No. 2a, however his grave is unmarked. 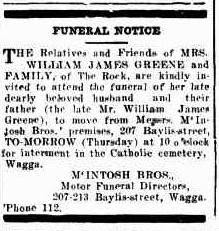 FUNERAL NOTICE
THE Relatives and Friends of MRS. WILLIAM JAMES GREENE and FAMILY, of The Rock, are kindly invited to attend the funeral of her late dearly beloved husband and their father (the late Mr. William James Greene) to move from Messrs. McIntosh Bros.' premises, 207 Baylis-street, TO-MORROW (Thursday) at 10 o clock for internment in the Catholic cemetery, Wagga.

Transcript:
FUNERAL
Mr. W. J. GREENE
The funeral of Mr. William James Greene, mail contractor, of The Rock, who died in Wagga Wagga on Tuesday, at the age of 60 years, after a month's illness, took place yesterday morning leaving Messrs. McIntosh Bros.' premises, Baylis-street, Wagga at 10 o clock.  The cortege included a number of relatives and friends of the deceased from 'Yirriba', Narrandera road, Culcairn, Henty, The Rock, Old Junee, Yathella, North Wagga and Wagga, which showed the respect and esteem in which he was held.  Several of his old shearing mates were also present.  The internment took place in the Catholic portion of the Wagga cemetery.  The carriers were Messrs. Thomas Michael Greene of Culcairn (brother), Robert W. Stanley of 'Yirriba' Narrandera road (son-in-law), George Bermingham of The Rock (nephew), Thomas Hamilton of Yathella, John L. Hart of Old Junee (relatives), and George A. Johnstone of Wagga.  The Rev. Father O'Rourke officiated at the gravesite.  The chief mourners were Mr. and Mrs. Robert W. Stanley of Narrandera road (daughter and son-in-law), Mr. T. M. Greene of Culcairn (brother), Mr. and Mrs. John McFarland (North Wagga), Mr. and Mrs. T. Hamilton (Yathella), Mr. and Mrs. G, Bermingham (The Rock), Mr. John Bermingham (The Rock), Mrs. Edmond Clear (Culcairn), Mrs. J. Galvin sen. (North Wagga), Mrs. Arthur Johnstone, Mr. John Johnstone and Mrs. J. McFarland (Wagga), relatives and friends.  Other friends were also present.  The coffin was covered with wreaths, including one from the staff of The Rock post office.
The funeral arrangements were conducted by Messrs. McIntosh Bros.' of Wagga. 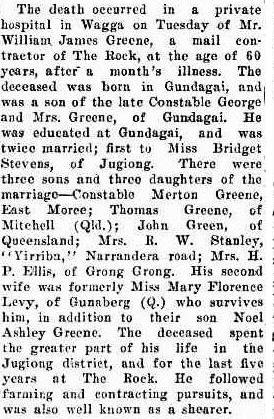 Transcript:
The death occurred in a private hospital in Wagga on Tuesday of Mr. William James Greene, a mail contractor of The Rock, at the age of 60 years, after a month's illness.  The deceased was born in Gundagai, and was a son of the late Constable George and Mrs. Greene of Gundagai.  He was educated at Gundagai, and was twice married; first to Miss Bridget Stevens, of Jugiong. There were three sons and three daughters of the marriage - Constable Merton Greene, East Moree; Thomas Greene of Mitchell (Qld.); John Greene of Queensland; Mrs. R. W. Stanley of 'Yirriba' Narrandera road; Mrs. H. P. Ellis of Grong Grong.  His second wife was formerly Miss Mary Florence Levy, of Gunaberg (Q.) who survives him, in addition to their son Noel Ashley Greene.  The deceased spent the greater part of his life in the Jugiong district, and for the last five years at The Rock.  He followed farming and contracting pursuits, and was also well known as a shearer. 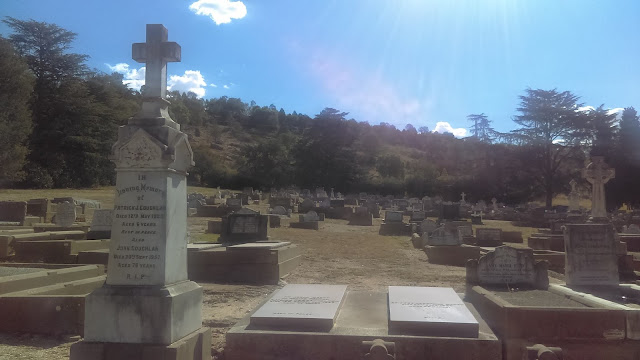 Wagga Wagga Monumental Cemetery, location Roman Catholic No. 2a where William James Greene is buried in an unmarked grave.