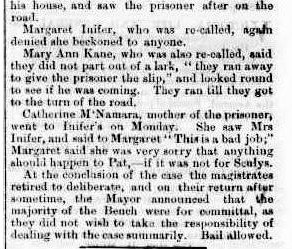 CHEWTON POLICE COURT.
Thursday, September 9, 1875.
(Before Messrs Meredith, Barker and Weatherley.)
Patrick McNamara surrendered to his bail on a charge of attempt to commit a rape on Margaret Inifer, a girl 16 years old.  Mr Leech appeared for the defence.
Prosecutrix deposed that she left Chewton about one o'clock on Sunday last, in company with Mary Ann Kane.  They went to O'Brien's, at the Junction ; the prisoner overtook them on the road, near O'Brien's.  After leaving O'Brien's, about 4 o'clock, the prisoner again overtook them on the road to the Cemetery.  He then accompanied me homewards, when suddenly he caught hold of me, and throw me down ; she screamed out.  This took place a little off the track.  He put his hand on my mouth.  Two of my brothers and George Sculy came up, and they called out.  He got up and ran away.  I did not see my brothers before they spoke.  Did not encourage prisoner in any way, nor was in the habit of walking with him.
To Mr Leech : He asked me if he should go home with me, but gave him no answer.  Did not wave my handkerchief, or make any signal for prisoner to come.  He said, 'You are a baby to cry.' On arriving at home she told her mother, in about an hour afterwards, about what occurred.  Told prisoner's mother there was no harm done.
Mary Ann Kane deposed : I was in company with M. Inifer, when they went to O'Brien's together.  I did not see Margaret wave her handkerchief to the prisoner.  George Sculy, about 12 years of age, said he recollected last Sunday, and of hearing screams three times.  He saw Pat holding Maggie on the ground.
James Inifer was on the ranges with his brother and G. Sculy, when he heard a noise and saw Pat McNamara and his sister as previously described.
Isaac Inifer, father of the prosecutrix, said his daughter is about 16 years old ; she came home about 7 or 8 o'clock on Sunday evening.
Mr Leech submitted that there was no case of attempt at rape proved.  Mr Justice Patterson had ruled in Lloyd's case, C.C. and P.318, that in order to convict on a charge of assault with intent to rape, the jury must be satisfied not only that the prisoner intended to gratify his passions on the person of the prosecutrix, but that he intended to do so at all events, and notwithstanding any resistance on her part.   Now, in this case, it was clear, even according to the story of the prosecutrix, that the prisoner desisted directly the boys came up.
The Mayor thought that was a point for the jury rather than the Bench.
Mr Leech then addressed himself to the defence generally, urging the Bench to even deal with the case summarily as one of assault, rather than compel the prosecutrix to give her evidence again in a crowded Court of Sessions, if they thought the prisoner had really in law assaulted her.  However, he went further, and asked them to look upon the case as one which only this form of resistance when discovery became inevitably.  He called -
Isaac Allan, who deposed that he remembered two girls coming to his house last Sunday.  He saw Margaret Inifer beckon down the road near his house, and saw the prisoner after on the road.
Margaret Inifer, who was re-called, again denied that she beckoned to anyone.
Mary Ann Kane, who was also re-called, said they did not part out of a lark, 'they ran away to give the prisoner the slip,' and looked round to see if he was coming.  They ran till they got to the turn of the road.
Catherine McNamara, mother of the prisoner, went to Inifer's on Monday.  She saw Mrs Inifer, and said to Margaret 'This is a bad job:' Margaret said she was very sorry that anything should happen to Pat, - if it was not for Sculys.
At the conclusion of the case the magistrates retired to deliberate, and on their return after some time, the Mayor announced that the majority of the Bench were for committal, as they did not wish to take responsibility of dealing with the case summarily. Bail allowed. 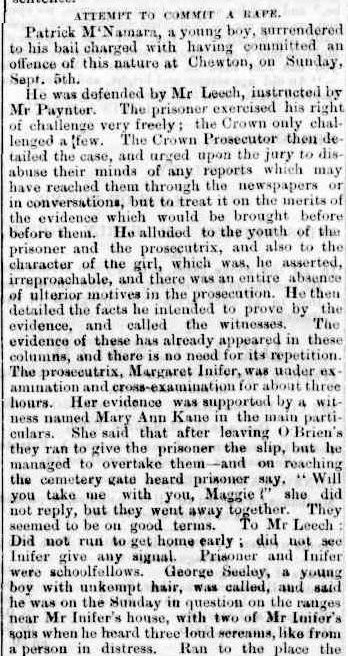 ATTEMPT TO COMMIT A RAPE.
Patrick McNamara, a young boy, surrendered to his bail charged with having committed an offence of this nature at Chewton, on Sunday Sept. 5.
He was defended by Mr Leech, instructed by Mr Paynter.  The prisoner exercised his right of challenge very freely ; the Crown only challenged a few.  The Crown Prosecutor then detailed the case, and urged upon the jury to disabuse their minds of any reports which may have reached them through the newspapers or in conversations, but to treat it on the merits of the evidence which would be brought before them.  He alluded to the youth of the prisoner and the prosecutrix, and to the character of the girl, which was, he asserted, irreproachable, and there was entire absence of ulterior motives in the prosecution.  He then detailed the facts he intended to prove by the evidence, and called the witnesses.  The evidence of these has already appeared in these columns, and there is no need for its repetition.  The prosecutrix, Margaret Inifer, was under examination and cross-examination for about three hours.  Her evidence was supported by a witness named Mary Ann Kane in the main particulars.  She said that after leaving O'Brien's they ran to give the prisoner the slip, but he managed to overtake them - and on reaching the Cemetery gate heard prisoner say. 'Will you take me with you, Maggie ?' she did not reply, but they went away together. They seemed to be on good terms.  To Mr. Leech :  Did not run to get home early ; did not see Inifer give any signal. Prisoner and Inifer were schoolfellows.  George Selley, a young boy with unkempt hair, was called, and said he was on the Sunday in question on the ranges near Mr Inifer's house, with two of Mr Inifer's sons when he heard three loud screams, like from a person in distress.  Ran to the place the sound proceeded from, and observed what took place, then called out 'hey ! Mac.' To Mr Leech : By the word, scream meant a screech.  Lived on the Bendigo-road; went home after leaving prisoner and Inifer ; told his sister, father and mother.  On the next day Mr Inifer came to the house and told witnesses's father that he would have to go to court, and state what he saw and knew.  When the boys came the girl Inifer was standing up and crying ; previous to that had noticed her clothes disarranged.  Other evidence of a similar character having been taken, Mr Leech addressed the jury for the defence, dwelling upon the relations between the prosecutrix and the prisoner, they had been at school together, called each other by their Christian names, kissed each other, and were on the most familiar terms.  He did not wish to say anything painful about the young woman, but in the discharge of his duty to his client, he must eschew those fancy sketches that had been drawn by the Crown Prosecutor about her pattern morality.  He averted to conversations that were 'warm' in their nature, and her denial of the version given by Mary Ann Kane, that the prosecutrix proposed to run and give Pat the slip.  Both the prisoner and prosecutrix walked by consent together in a secluded place, and when the alleged attempt impropriety occurred there was no screaming until two boys were seen.  Was this screaming anything more than coy reluctance at approaching discovery!  If a woman had no other weapons of defence, she had her finger-nails and these she could use with good effect ; however, there was no mark on the prisoner to indicate any resistance whatever.  He strongly urged them to lay aside all feelings beyond the facts as disclosed by the evidence.  His Honour summed up, and remarked that they had a very painful duty to perform, more especially when they considered the youth both of the prisoner and prosecutrix ; they had heard the learned gentleman on both sides, but as each was biassed to the opinion they advocated, the jury, however, were to deal with the evidence in a position of neutrality, unbiassed, and impartially.
He then glanced at the evidence, analysing it, and pointing out their agreements and discrepancies, and then urged upon the jury that there were important facts in the case which could not be overlooked, - the whole story was in his opinion perfectly consistent and connected.  They should not capriciously decide upon the truth or otherwise of the evidence of any particular witness.  The law of the case was clearly laid down, in reference to the resistance required to show the offence as indicated, whether it was an attempt to commit rape or a common assault.  The jury then retired, and, after an absence of twenty minutes, returned to court with a verdict of Not Guilty on both counts.