June 22, 2018
Today's post involves my Great Great Grandmothers second husband Henry Inifer.  I believe that Henry was born the son of Isaac Inifer and his wife Margaret nee Sherdon in Essex, England about 1837.

Some time back we received an inquiry from Mr John Tytherleigh, Castleton, requesting some particulars regarding the arrival of the emigrant ship, Mary Ann, from London.  The request was unfortunately overlooked by us, but we have now searched the back numbers of the Portland GUARDIAN and had the following in the issue of Friday, January 30, 1857 :-
The following appeared in the shipping intelligence :-
Arrived - January 18. - Mary Ann, 723 tons, from London, with 291 immigrants.  Lambert, commander.
In the shipping notices we find the following :- The ship Mary Ann, Lambert, 723 tons, from Plymouth, 13th November, with 291 immigrants, under the charge of Dr. George Tallais, surgeon superintendent, arrived in the Bay on Wednesday last.  There have been on board 4 births and 5 deaths children.  She has made a good passage, Spoke the Kossuth from London to Melbourne, 112 days out, two days before arrival ; and on the 23rd December, the Stag, from Leith to Adelaide.  She also brings about 50 tons cargo.
In the domestic intelligence there appears as under : - The Mary Ann - This fine emigrant ship, under the skillful commander, Captain C. F. Lambert, arrived in port last Wednesday.  Her passage from Plymouth to Cape Bridgewater was an excellent one.  She made the land at Cape Bridgewater in 73 days 9 hours mean time ; was becalmed outside 48 hours.  The Mary Ann ran down much of her longitude in 52 deg. South, where many icebergs were observed.  She was hove to in a dense fog one night, and under easy sail two days.  The run from Tristam Da Cunha to land was in the remarkable short time of 31 days.  The immigrants brought by the Mary Ann are all healthy, in good condition and were well conducted throughout the passage.  The excellent manner in which they are brought out does great credit to the surgeon superintendent, Dr. Tallais.  The immigrants are all landed this day and are thus classified, 56 married men ; 56 do women ; 98 single men ; 18 single women ; 45 children, 1 to 12, 17 infants, 290, total equal to 25 1/2 status adults ; 4 births ; 5 deaths, very young children, on the voyage. 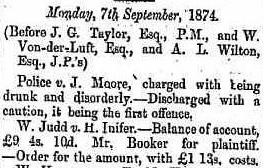 
On the 25th September 1876 Henry married my Great Grandmother Winifred O'Connor nee Mooney at St. Johns Church, Heathcote, Victoria.  Henry is stated as being 39 years of age, a bachelor, and a miner whose usual place of residence was Redcastle, Victoria, while Winifred was stated as being 45 years old, a widow with seven children, and a domestic servant whose usual place of residence was also Redcastle, Victoria.

Schedule A. - [Rule 4.]
Notice of Application for a Gold Mining Lease.
WE, undersigned, hereby give notice that, within six days from the date hereof, we will leave with the Warden of the Mining Division of Heathcote, Sandhurst District, an application for a Gold Mining Lease, the particulars whereof are hereunder set forth :-
Name in full of each applicant, with the full address of each, and style under which it is intended the business shall be carried on - John Collins, Redcastle ; John McKee, Redcastle ; and Henry Inifer.
Extent of ground applied for, and whether on or below the surface, or both, or a lode - 10 acres more or less ; on and below the surface ; quartz.
Name of each person (if any) who is in occupation of the land - None.
Minimum number of men to be employed - For the first six months, 2 men ; subsequently, when in full work, 8 men.
Precise locality of the ground - Three miles East of Redcastle, near Staffordshire Flat.
Term required - Fifteen years.
Time of commencing operations - At work at present
Amount of money proposed to be invested, and in what manner the land is to be worked - £2,000 ;
Whether the boundaries of the land applied for will include any river, creek, deposit of permanent water, spring, artifical reservoir, public roads, or subject to any public rights - None.
General remarks - None.
Date and Place - Heathcote ; 9th October, 1879.
JOHN COLLINS,
On behalf of the applicants


At some stage Henry, Winifred and some of Winifred's children from her first marriage moved to Cobar in New South Wales, probably following the mines.  It was here that Henry died on the 9th July 1889 of Emphysema and heart disease, he was buried at Cobar Cemetery on the 10th July 1889.  He had no known children.

DEATH has been exceedingly busy in our midst during the past week ; four well-known residents having been removed.  These were Messrs. J. Payne, E. McNemay, John Andrews, and H, Inifer.  The two first were Freemasons, and were accorded Masonic funerals.