March 30, 2018
Today’s post involves my Great Grandfather Michael O’Connor.  Michael was the son of Patrick Connor/O'Connor and his wife Winifred nee Mooney.  Born in Bendigo, Victoria in 1864 he married Elizabeth Phoebe Walker at Cobar in 1891.  He died in Newcastle on the 3rd July 1935 and was buried at Sandgate Cemetery. 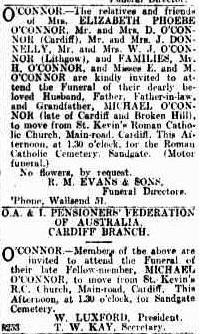 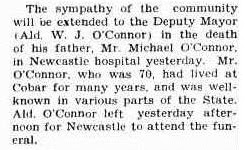 The sympathy of the community will be extended to the Deputy Mayor (Ald. W.J. O'Connor) in the death of his father, Mr. Michael O'Connor, in Newcastle hospital yesterday.  Mr. O'Connor, who was 70, had lived at Cobar for many years, and was well known in various parts of the State.  Ald, O'Connor left yesterday afternoon for Newcastle to attend the funeral.

More newspaper items related to this event can be found here.