May 31, 2016
I was doing some research into my 4th great grandfather William Bell and came across the following advertisement by him.

Curious about the case I found the following information: 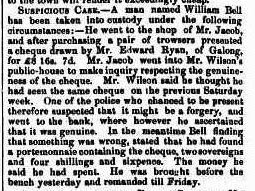 SUSPICIOUS CASE.- A man named William Bell has been taken into custody under the following circumstances:- He went to the shop of Mr. Jacob, and after purchasing a pair of trowsers presented a cheque drawn by Mr. Edward Ryan, of Galong, for £8 16s. 7d. Mr. Jacob went into Mr. Wilson's public-house to make inquiry respecting the genuineness of the cheque.  Mr. Wilson said he thought he had seen the same cheque on the previous Saturday week.  One of the police who chanced to be present therefore suspected that it might be a forgery, and went to the bank, where however he ascertained that it was genuine.  In the meantime Bell finding that something was wrong,stated that he had found a portemonnaie containing the cheque, two sovereigns and four shillings and sixpence.  The money he said he had spent.  He was brought before the bench yesterday and remanded till Friday. 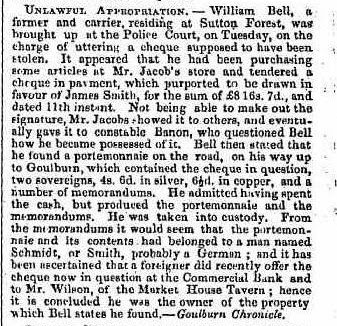 UNLAWFUL APPROPRIATION. - William Bell, a farmer and carrier, residing at Sutton Forest, was brought up at the Police Court, on Tuesday, on the charge of uttering a cheque supposed to have been stolen.  It appeared that he had been purchasing some articles at Mr. Jacob's store and tendered a cheque in payment, which purported to be drawn in favour of James Smith, for sum of £8 16s. 7d., and dated 11th instant.  Not being able to make out the signature, Mr. Jacobs showed it to others, and eventually gave it to constable Banon, who questioned Bell how he became possessed of it.  Bell then stated that he found a portemonnaie on the road, on his way up to Goulburn, which contained the cheque in question, two sovereigns, 4s. 6d. in silver, 6 1/2 d. in copper, and a number of memorandums.  He admitted having spent the cash, but produced the portemonnaie and the memorandums.  He was taken into custody.  From the memorandums it would seem that the portemonnaie and its contents had belonged to a man named Schmidt, or Smith, probably a German ; and it has been ascertained that a foreigner did recently offer the cheque now in question at the Commercial Bank and to Mr. Wilson, of the Market House Tavern ; hence it is concluded he was the owner of the property which Bell states he found. - Goulburn Chronicle.

POLICE REPORT.- The business at the police court has consisted of remanding one or two cases of larceny, and fining three or four drunkards.  William Bell, who had found a portemonnaie containing cash and a cheque, and made away with the former and endeavoured to pass the cheque to Mr. Jacob, was brought up on Monday, and ordered to refund the amount to the owner.


Obviously William Bell wanted the wider community to know that neither he, nor any of his family were involved in this case.  Being a former convict who was now a respectable businessman he would have been very sensitive to any suggestion that he was a person who would unlawfully appropriate the property of someone else.