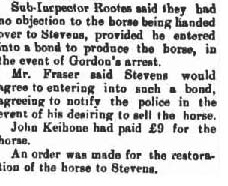 John Patrick Stevens made application for the restoration of a horse, then in the possession of the police, such horse being supposed to have been stolen, and sold to John Keihone.  Mr. Fraser for Stevens.  Mr. Weekes watched the case in the interests of John Keihone, who held a receipt for having purchased the horse from a man named Gordon.
John Patrick Stevens, laborer, residing at Gobarralong, deposed : The information is mine.  The horse is a dark bay, branded No. 2 on the near shoulder.  He purchased the horse from Richard Roche, of Nanangroe, about three years ago.  He was working at Nanangroe then.  He paid £10 for the horse.  The horse in the possession of the police was his.  On November 15 he was working for Mr. Henry Crowe, of Gobarralong.  He knew Thomas Gordon, who was working there then.  Gordon got possession of the horse that day.  He had made application for and obtained a warrant for Gordon's arrest for stealing his horse.
To the police : If Gordon is arrested I am prepared to produce the horse for the purposes of the prosecution, if the horse is restored to me.
To the P.M. : I did not get a receipt for the horse.  I lent the horse to Gordon to go to Coolac.  He promised to return the horse next day.
Richard Roche, Nanangroe, deposed : Three years ago I sold a horse to Stevens for £10.  The horse is now in the possession of the police.  I did not breed the horse.
Sub-Inspector Rootes said they had no objection to the horse being handed over to Stevens, provided he entered into a bond to produce the horse, in the event of Gordon's arrest.
Mr. Fraser said Stevens would agree to entering into such a bond, agreeing to notify the police in the event of his desiring to sell the horse.
John Keihone had paid £9 for the horse.
An order was made for the restoration of the horse to Stevens.